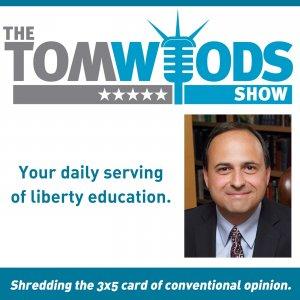 Well, here's a novel thing: a civil discussion between people who disagree! Mark Skousen, who leans bullish, and Jon Wolfenbarger, who leans bearish, make their respective cases for where the economy

Kevin Gutzman, author of the new book The Jeffersonians, talks Madison, Monroe, and the Constitution (and the key person who undermined it).

Ali Rak has accumulated about 20 legislative victories, whether getting bad bills defeated or good ones passed, all while living in a blue county in a blue state. She shares specific tools and strateg

Ep. 2271 Striking Back at Propaganda Aimed at Children

Tom talks to Germinal G. Van about the period of American history that historians treat cartoonishly, with wicked businessmen allegedly exploiting everyone.

Ep. 2269 The Effects of Lockdowns on Society

Last year an anonymous group of well-known filmmakers decided to embark on a crucially important project: documenting the truth about the Covid lockdowns: the data, the human stories, all of it. Hawk

Ep. 2268 Homeless and (Seemingly) Hopeless, to Success and Happiness

My wife's uncle, Paul Laino, has rather a stirring story to tell: after spending four years homeless and addicted to drugs he cleaned himself up and now makes, let's just say, a very comfortable incom

Ep. 2267 Have We Lost Younger People? And Other Issues, with Ezra Wyrick

Aron Lam, mayor of Keenesburg, Colorado, surprised the incumbent mayor by actually running a real campaign for the office, and had all his ducks in a row before the incumbent knew what hit him. Might

Ep. 2265 Clint Russell on Woke Corporations, and What We Should Do Now

Clint Russell of Liberty Lockdown joins me to talk woke capitalism and ESG, why mankind is so frustrating, and productive approaches to living in a hostile world. Sponsor: This Sunday, January 15th, 2

Ep. 2264 The Real Resistance: State Pushback Against the Feds, 2023 Edition

The Tenth Amendment Center's Michael Boldin discusses issues on which states are prepared to push back in the 2023 legislative session, and progress that was made in 2022.

The great Michael Rectenwald just released his new book The Great Reset and the Struggle for Liberty. He joins us to discuss what exactly the program is, what its constituent parts are, how they all w

The prolific Germinal G. Van returns to discuss his latest work, a two-volume study of wealth distribution and inequality in American history.

Catholic and non-Catholic listeners alike requested an episode on Pope Benedict XVI, so I invited Catholic publisher Roger McCaffrey to discuss what his pontificate meant in the context of the post-Va

The great Carla Gericke, president emeritus of , kicks off a new year of the Tom Woods Show by describing how she kicked a serious alcohol habit. Sponsors: Crowdhealth - Save $99 when you use code WOO

Ep. 2259 When the State Promotes Suicide

Tim Moen joins us to provide the background to some of the stories we've been hearing coming out of Canada about the promiscuous recommendation of euthanasia there.

Matt McWilliams, libertarian and businessman, joins us, as we get ready to make our new year's resolutions, to discuss the opportunities that technology has made available to us, and how we can put th

Ep. 2257 The Vaccine Injured: Ignore Them

Josh Stylman, executive producer of the film Anecdotals, joins me to discuss the fate of the vaccine injured in the age of COVID. I rank this one in the top ten of all 2,257 episodes. Special Offer: H

Ep. 2256 Financial Traps Everyone Falls Into

There's so much bad financial and life advice out there that it's no wonder people often go so dreadfully wrong. Luke Tatum joins me for a review of the conventional wisdom and what people should do i

Chris Cofer and Pete Quinones join me to discuss their new film, Overpoliced, and why the police shouldn't be the one group of government employees we're naive about.

Ep. 2254 How to Opt Out of the Technocratic State, Post-Covid

Derrick Broze joins us to discuss technology as a double-edged sword and what we can do to protect ourselves against bad actors. Sponsor: This Christmas, get your friends and loved ones something orig

The great and brilliant Kevin Gutzman joins us to discuss his brand new book, released just today, called The Jeffersonians: The Visionary Presidencies of Jefferson, Madison, and Monroe.

Ep. 2252 The Military Can't Win the War on Drugs, and Other Lessons from U.S. Foreign Policy

Christopher Coyne joins us again to discuss further problems with and failures of the American empire. Sponsor: This Christmas, get your friends and loved ones something original and unusual but that

Twitter denied doing the various things it's now becoming clear it obviously did do when it comes to suppressing dissident voices. Auton MacIntyre joins me to discuss this ongoing story. Sponsors: Cro

Ep. 2250 Gerald Celente on Ukraine, the Economy, and the American Elite

The great Gerald Celente, publisher of Trends Journal, reviews where things are going in terms of the economy, foreign policy, and civil liberties, and what the bright spots are. Sponsor: This Christm

Ep. 2249 The Military State and Why It Persists

Christopher Coyne joins me to discuss some of the factors contributing to the seeming permanence of the military-industrial complex in the United States.

Ep. 2248 Rand and Rothbard Convinced Me

The great Murray Sabrin joins us to discuss how his experiences as an insatiably curious person and a child of an immigrant family led him to libertarianism and a career spent in defense of liberty. B

Whitney Webb joins us to discuss the unknown history of collusion between intelligence services and organized crime, and the practice of blackmail, in order to set the context for Jeffrey Epstein.

Brion McClanahan joins me to discuss the prospects of these men, the Trump/DeSantis feud, whether DeSantis would make us crazy, whether Biden has a chance, and more. Sponsor: Omaha Steaks - Go to and

We're outgunned and outnumbered, and crazy ideas are considered mainstream. What should we do now? Michael Heise joins me to discuss his plan: Project Decentralized Revolution.

Stephan Livera joins me to discuss what happened with FTX, whether it is an indictment of Bitcoin, what it means for the Bitcoin price, whether it was a money-laundering scheme, and a lot more. Sponso

The radical Thomas Paine, who could both cheer and enrage with his various writings, was a fascinating and important figure in American history, and historian Dave Benner -- author of a new biography

This week Stanford University's Jay Bhattacharya triumphed decisively in an Oxford-style debate on lockdowns and "focused protection" with Sten Vermund, and he joins us today to discuss it. Sponsor: O

Ep. 2241 How to Overcome Film Censorship

We all know about documentaries that the official outlets won't let us watch. Or movies whose dialogue sounds like a woke treatise rather than anything actual people would ever say. Cory Tucek created

Tech entrepreneur Pete Zaborsky joins me to discuss his vision of a future in which all voices can be heard, and how to get there. Sponsor: Crowdhealth - Save $99 when you use code WOODS at

John Ziegler, co-host of the Death of Journalism podcast, joins me to discuss the mess that is journalism today, how narratives ossify into the Official Position that nobody may contradict, and whethe

Ep. 2238 A Communist Reveals Her Secrets

Paul Kengor, professor of political science at Grove City College and editor of The American Spectator, joins me to discuss the curious story of Bella Dodd, once a committed communist who says she hel

The great Dominic Frisby, one of my favorite Tom Woods Show guests, returns to update us on the wild situation in the UK, why Liz Truss resigned, why tax reductions are off the table there seemingly f

Ep. 2236 The Man Whose Words Are Forbidden

Filmmaker Jason Rink joins us to discuss his new project (in three episodes) called Q Sent Me, about the Q shaman from January 6. Even discussing the topic and allowing the man to speak without imposi

Dan McCarthy and I discuss the "red wave" that failed to materialize, what it means for the future, and whether we should succumb to despair. Sponsors: Crowdhealth - Save $99 when you use code WOODS a

Dr. Peter McCullough, a widely published and respected cardiologist who has been a source of sanity during Covid times, has been threatened with the loss of his board certifications for his cautions a

Ep. 2233 The Fed Is Screwing Up Housing Again

The housing market is all out of whack again, and the culprit is a familiar one. Ryan McMaken joins us for the details.

Ep. 2232 When Civilizations Hate Themselves

Benedict Beckeld joins me to discuss a phenomenon -- disproportionate self-criticism, even hatred -- that we see creeping into civilizations when certain conditions are met.

Ep. 2231 Jeff Deist on How and How Not to Advocate a Private Law Society

Ep. 2230 What Libertarians Can Do in a World Gone Mad

The popular caricature of libertarianism involves our alleged belief in "rugged individualism," and "I don't need help from anybody," etc. Opposing collectivism doesn't mean opposing all groupings of

Ep. 2229 The Evil Woodrow Wilson, and Other Stories from U.S. History

The authors of A Twisted History of the United States return to discuss Grover Cleveland, Woodrow Wilson, and more material from U.S. history that's usually distorted and mangled. Sponsor: Crowdhealth

Ep. 2228 A Twisted History of the United States

Authors Gary Richied and Charlie Westerman join me for an unconventional gallop through early American history. Sponsor: The Expat Money Show with Mikkel Thorup is the #1 resource for anyone consideri

Clint Russell and I discuss the Alex Jones verdict, the medical establishment, the post-Trump GOP, how my friend John Bush became successful and why more libertarians should be like him, and more. Thi

Our friend Gene Epstein discusses his recent debate with an economist who blames the free market for disappointing economic growth. Sponsor: Crowdhealth - Save $99 when you use code WOODS at

We've been taught to have a superstitious reverence for the government-pharmaceutical establishment, but is it justified?