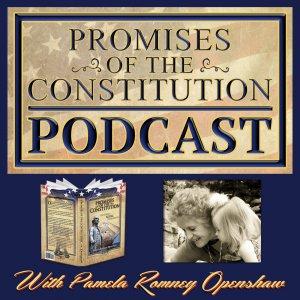 The Future of Freedom is in our Hands


By Promises of the Constitution

Promises Podcast 025 - How Do You Stay Safe in America?

Why is the county sheriff an important resource to you? What can you do to stabilize our tomorrows?​

Promises Podcast 024 - The Constitution: Those Who Contributed to Freedom

Who developed the ideas of freedom? What did the American Indians contribute to our liberty?

Promises Podcast 023 - ​How Do You Change the Constitution?

Both Impeachment and the Amending process change our government? How would we change government w...

Promises Podcast 022 - Why Didn't the Founders Eliminate Slavery in the US Constitution?

What were the powerful reasons slaves could not be emancipated in the Constitutional Convention o...

If you really want things to be equal, what do you do? Has unfairness ever been a problem in the ...

What happens when we get our rights from others? Why are duties part of the package?

Political parties always cause strife. George Washington warned us about them, but we didn't list...

Promises Podcast 018 - How Does Socialism Change the Economy?

Why does man providing for himself defeat socialism? Inflation is the great enemy! How does it ...

How has democratic socialism fooled Americans? What is the "footprint" of socialism?

How do politicians cause the loss of liberty? Must we limit some liberties for our protection?

Can laws founded on man's reasoning protect us? What do skyscrapers and Jello have to do with gov...

What do America's founding documents declare about God? Why did Founder Benjamin Rush say the Con...

Why does the religious commitment of our Founders matter to the government they created? Were som...

How would the United States of America have come into being without Patrick Henry, the Southern F...

What were the steps that led to America's birth? How did the Constitution and the Declaration of...

Do we have a Democracy? What is the difference between a Republic form of Government and a Democr...

Do States have the right to determine their own laws in spite of what the Federal Government dete...

How do choices we make have an influence on Governments both locally and nationally? What can we ...

What are the Rights & Duties the Constitution outlines and gives us as citizens of the United Sta...

What is the difference between Freedom & Liberty? Is either one better than the other, and how do...

Promises Podcast 003 - Are There 2 Constitutions?

Most people wonder if our Founding Documents are outdated, and if they are relevant anymore for o...

How does power help or hurt in government? What abuses of power do we see in our government today?

Get to know Pam and why she wrote "Promises of the Constitution." Is there a solution to our nat...